As I mentioned in another post, a trip to Chicago is never complete until one has eaten a hotdog or two.  Downtown hotdogs, check. 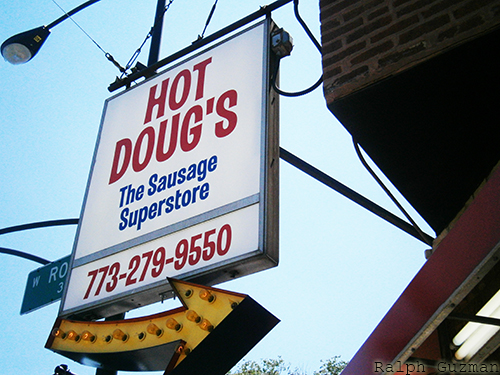 About 30 minutes by train from downtown Chicago is a small hotdog place in Avondale neighborhood called Hot Doug’s.  It only has one branch, but has a great cult following– tourists and locals alike line up for as much as 90 minutes to get in and order, which was our experience.

Anthony Bourdain says it is one of the 13 places you have to eat at before you die.  And Bon Appetit Magazine has at one point, declared it as one of the Top 50 restaurants in the planet.  Need I say more?

The place specializes in gourmet sausages, and its owner, Doug Sohn, has made it his mission to make them affordable.  A look at the menu shows hot dogs and sausages being offered at reasonable prices. 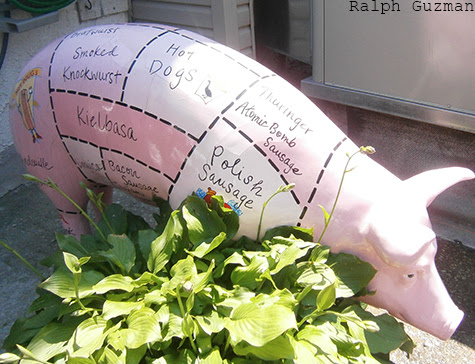 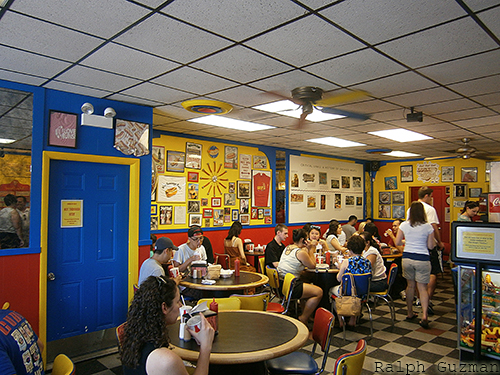 The ambience is very casual and relaxed.  I also loved the decors of the place, which are very much reflective of the Sohn’s passion when it comes to sausages. 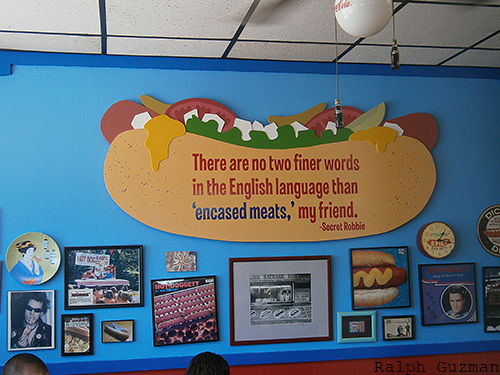 What has made them very prominent are their hotdog sandwich with foie gras, which I will mention in greater detail later.  Here’s a look at their menu on the Saturday we were there.  Personally, I would suggest going there on a Saturday, which is when their menu gets a lot more interesting. 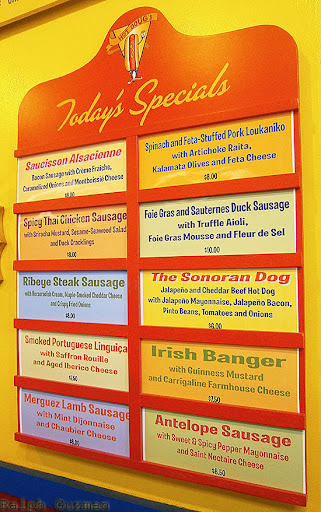 And now, the moment you have been waiting for: the food.

Before the sandwiches, we ordered their French fries — rendered in duck fat.  The duck fat doesn’t make its presence obviously felt, but it does add to the greater taste of the fries.  They’re only available during Saturdays.  They were fried very well and had a good bite.  They don’t turn soggy even several minutes after they have been served. 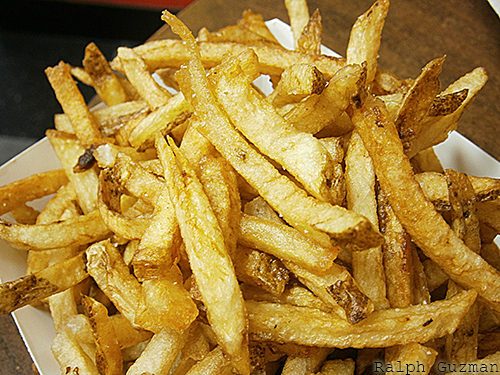 We ordered three hotdogs and fries, starting with The Dog, which is their version of the Chicago Dog with “everything” on it.  It had more toppings in it like carrot, which, personally, I didn’t know, went well with Chicago Dogs. 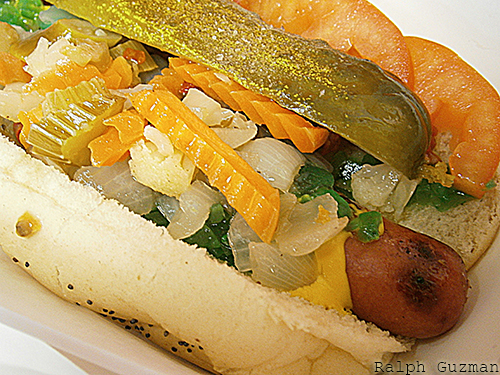 I was also curious about another special for the day, which was the Sausage and Smoked Shrimp Sandwich.  I really could not taste the shrimp, and neither could I distinctly taste the chorizo, but it was still good.   It had its own unique, smoky flavor, while the smooth, creamy goat cheese and dijon mustard complemented the sausage very well. 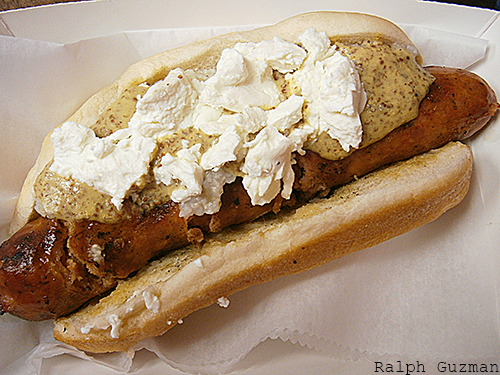 And what I have been looking forward to for at least two years– Hot Doug’s famous Foie Gras and Sauternes Duck Sausage. 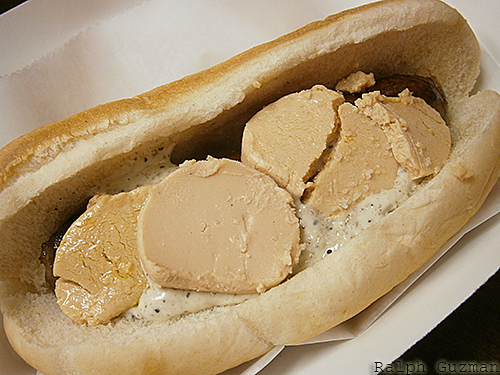 It’s foie gras on top of duck sausage.  Adding to the flavor is a truffled aioli.  Now, let’s not judge a book by its cover.  It looks very simple.  But the taste is almost wonderfully indescribable.  The taste of the foie gras is superb to say the least, but one has to put more words to justifiably praise this famous dish.  The foie gras brings out the flavor of the duck sausage more, and complements it.  The truffled aioli does the same for the duck and foie gras.  It is pure guilty pleasure, and it is something you have to eat at a very leisurely pace in order to really enjoy it.  Truffle + duck + foie gras = pure epicurean delight.

And in my experience, here’s the irony: while it awakens certain taste buds that turn out to be present (but hidden) all along, the taste is pleasurably fleeting.  So in the end, you would actually be tempted to get another one just to get that foie gras high.  Of course, I chose not to, knowing how the body can only take too much of goose fat.

In the course of our visit to Hot Doug’s I got to meet Doug Sohn himself, who was taking orders at the counter.  There’s a big probability that he will take your order when you visit. 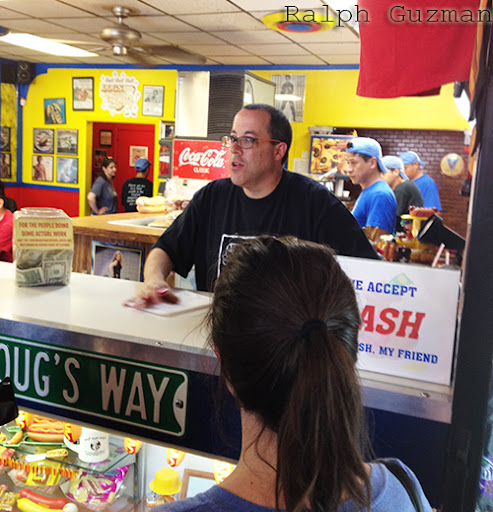 He struck me as a very cordial person.  After all, it was he himself who took orders.  I told him that I flew all the way from the Philippines to go to his place, which he appreciated.  In jest, he told me that I won the “customer from the farthest place” for the day. 🙂

Hot Doug’s is open Monday to Saturday.  They are only open from 10:30 a.m. to 4:00 p.m.  The place only accepts cash.  I would also suggest calling them ahead of time to make sure that they are open.  Actually, we went to the place a Saturday the week before to only find the place closed because, as Doug explained a week later, certain things come up with small businesses.   Well, if you have great food, I am very forgiving and accommodating.

Below are the contact details for Hot Doug’s.  When you go to Chicago, don’t miss this place.  And yes, I agree that this is one of the place you have to try out — dying or not.