CHICAGO — Yipee!  My Tito Joy (Uncle Joy) has driven all the way from Minnesota to see me here.  Tito Joy is my mom’s brother, and has taught me a tremendous lot about the joy of cooking– and dining.  He loves Chicago and knows all the best places to eat at.

So just like any very gracious host, he asked me where I wanted to eat tonight.  I actually was fine with anything.  My only request was  to go to a one-of-a-kind place, a place I normally don’t see in Manila.  And so, we took the train to the nearby suburb of Irving Park, and went to have a taste of Morocco in Chicago– proof once again, of how rich this city is when it comes to all things culinary.

We ate at Shokran.  Shokran, the staff explain, is an expression of gratitude in Morocco.  It is also the expression of delight when one receives an act of kindness from others. In other words, it’s their way of saying  “thank you”. The restaurant was opened in 2008 by Khalid Kamal,  who moved to the United States from Morocco and studied in Kansas’ Wichita State University.  To cut the long story short, Khalid, upon coming to the United States, could not find a good Moroccan restaurant.  So he decided to open one himself to share the richness of his country’s cuisine. 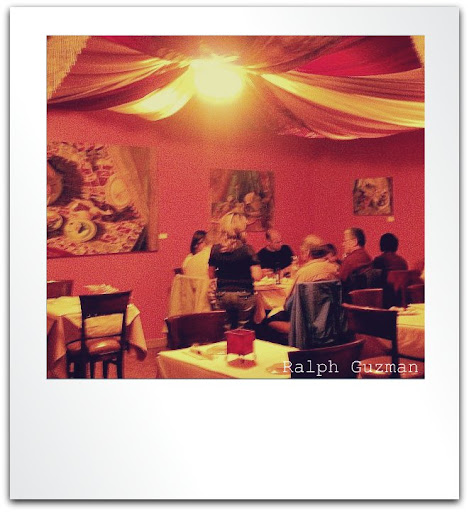 It’s a very homey restaurant.  Simple and nothing too fancy.  The interiors are proof  Morocco’s rich culture.  The place is quiet, making it very conducive for good conversation.

While we were still thinking of what to order, we were already given an appetizer on the house– pita with a garlic-olive dip, as well as a lightly-spiced red pepper dip.  Both were delicious, and I even enjoyed combining the two dips together.  The olive, of course, had a salty taste, while the red pepper had a spicy yet lightly sweet, fruity after taste. The first official order was Hummus.  It was white in color and not really on the yellow side, which I often see in Manila.  Tito Joy says the hummus of many restaurants may be over-roasted.  Shokran’s was very smooth and creamy.  The olive oil and actual chickpeas added greater flavor.  I have to say that I almost finished the whole thing.  The toasted pita brought out its great taste.

Next, we had Merguez, another appetizer.  They’re sausages filled with lamb and beef, grilled and served with dijon mustard.  The lamb was grilled well.  I have to say though that as my palate is very particular when it comes to lamb, I felt it still had an after taste.  Good thing the dijon mustard solved this.

My runaway favorites, however, were the two main courses.

The first dish was Couscous, topped with marinated chicken and vegetables.  The couscous was moist, and the vegetables were steamed just right — they were still crunchy and not soggy.  With the couscous, we were given a bowl of (chicken) broth that had chickpeas.  We were told to pour small portions of it as we ate the couscous.  The warm broth brought out the great flavor of the dish and made the chicken even tastier.  Superb! 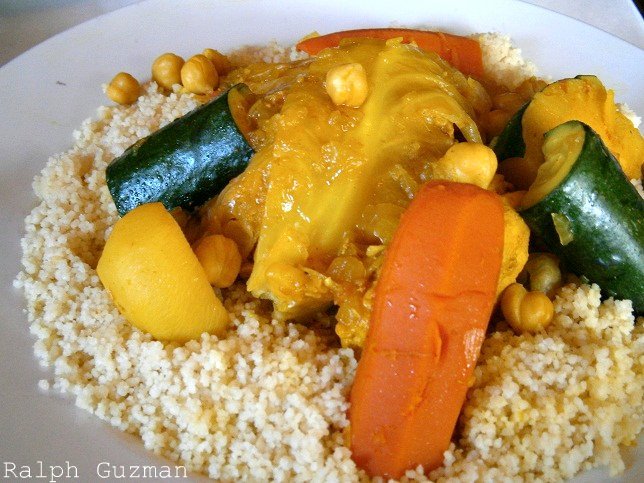 Now, the next dish came in this. 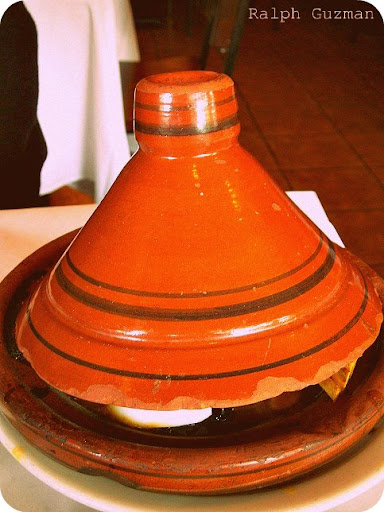 It’s a tagine, an earthenware pot widely used in North Africa.  The tagine is put on top of the base while cooking to prevent the flavors from escaping.  What’s inside?

It’s Lamb Fez, a stew with tender lamb, eggs, prunes, honey, cinnamon and almonds.  The lamb was perfectly tender — falling off the bone.  It had a good contrast with the crunch of the almonds and the sweetness of the prune.  The egg– the yolk specifically– gave it extra creamy flavor as everything melts in your mouth.  It’s Moroccan comfort food, I have to say.  As for the lamb?  It had none of the after taste I mentioned earlier.  You just taste the real, delicious flavor of the lamb.  I’m glad we ordered this one.

We didn’t have room for dessert anymore, but the staff, who are all Moroccan by the way, gave us  complimentary tea.  It was very refreshing.  After all, the tea combined the flavors of fresh mint, orange blossoms, honey, and according to them, a special kind of green tea.  It was a perfect way to end the meal. By the way, the tea came in the ornate pitcher below.

It’s a good place to go to, and if you’re in Chicago, it is accessible by train.  Just take the blue line of the CTA and get off the Irving Park Station.  You’ll be able to see more specific directions by placing the exact address below on Google maps or other related software.

I’m pleased to also know that Shokran is Michelin Guide Recommended in 2012.  The staff explained that they’re not a Michelin star restaurant because wine is not really part of their menu.  While I learned about this as we were about to leave, Michelin raved about the same things we ordered.  The people of Michelin tells customers to brace themselves for the melt-in-your-mouth braised lamb and the couscous among others.  And they’re right.

So, shokran, Shokran!  Thanks for the good meal. 🙂