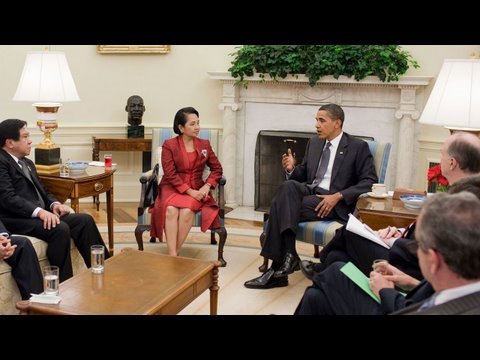 Amidst fears that La Gloria would stay as the top banana after 2010 and amidst fears of a no election scenario, the Philippine Star’s headline story today comes as a sigh of relief for a nation anxious.  Former media colleagues Paolo Romero and Jess Diaz quoted a source who claims that when PGMA visited US President Barack Obama last month, Obama hinted on the importance of the elections here pushing through next year.

Reading between the lines, Obama’s hint is really a  gentle pressure on Mrs. Arroyo to ensure that elections do take place.

And gentle a hint as it is, Obama’s words may be more than enough to make PGMA think twice about staying as president beyond 2010.  Surely, the gentle pressure was enough to make PGMA quip and assure that she will be out next year.  Trust on PGMA to now ensure that elections do push through even if she has gained notoriety in the past for reneging on her promises — unless she has the nerve to lie to Uncle Sam.

Who could blame America for worrying about no-el in 2010?  If one were to believe former Speaker Jose De Venecia, PGMA almost declared martial law in 2005 at the height of the Hello Garci controversy, which seriously threatened to oust PGMA. De Venecia said that if it weren’t for the US’ opposition to the plan — as the Palace had approached the Americans to get support for this — a repeat of 1972 might have happened.

Well, for once, the leftists would be happy about American pressure on the Philippines.

However, let’s not forget that PGMA can still run for Congress.

And of course, even if elections were to push through, there is no guarantee yet that it would be clean and honest.  Obama should have explicitly mentioned this as well, pressuring PGMA to be on “the right side of history”.  But let’s see.  Just like the people in this country, the US government, for the sake of its interests, does not want a repeat of the cheating in 2004.