CHICAGO — In business school — or by reading their biographical book  — we discovered the truth about Starbucks.  Nope, they are not in the business of selling coffee.  The claim we have heard over and over again: they are in the business of selling the “Starbucks Experience”–the experience and pleasure of just relaxing at the coffee house, chatting with friends, and being able to relax– while yes, having your favorite Starbucks coffee.  And perhaps, a dessert on the side would be called for.

Coffee houses in European cities like Paris or Vienna were supposedly the inspiration for this marketing strategy, which was imported by Starbucks to the States, and eventually adapted by many other coffee houses all over in an attempt to also get their piece of world domination.

I, for one, have been happily deceived by such strategy. I can spend time at Starbucks and other coffee houses reading a book in peace, exploring my creative side, or catching up with friends.   Although I must state something very clearly: I have never–never!– wanted to go to Starbucks just to be seen on a Saturday night like many of Manila’s, uhm, social mountaineers (do take note further that not everyone who goes to Starbucks on a Saturday in Manila is guilty, ok?).  Yes, I am a snob about this.  I avoid a certain Starbucks branch south of  Metro Manila like the plague on Saturday nights.

So thanks to marketing and positioning (and thanks, too, to an irritating actress who said she “loves the Starbucks at Rockwell in Makati”), Starbucks in the Philippines has outclassed its counterparts in other countries.  More than an experience, the Philippines’ Starbucks has become one of the many frivolous status symbols for those who want to project that they’re part of the upper class.  I sense an element of Noli Me Tangere’s Doña Consolacion here. 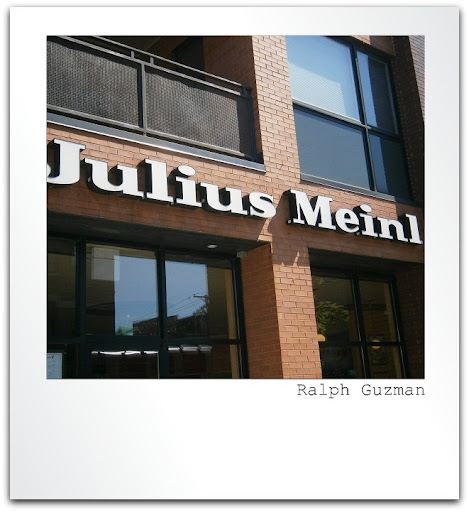 In this visit to the States, I have, of course, crossed out Starbucks from the list of to-do’s.  This is especially true now that I am in Chicago, which has so many choices for food.  Why not have the real experience here?

So with my Tito Joy (Uncle Joy), we went to Julius Meinl, located at the suburb of Southport.  [A little note on Southport: it’s a beautiful suburb that has a row of many diverse restaurants.  And I am not exaggerating when I say this: the moment I stepped out of the train at Southport, I smelled the aroma of delicious food!  You must visit this suburb and explore it if you go to Chicago].

Julius Meinl is an institution in Austria.  They have been in business for 150 years.  I read that the founder — yes, a fellow named Julius Meinl — was an innovator during his time.  He was the first to sell freshly roasted coffee in Vienna, saving residents from the need to do the arduous task of roasting on their own stoves.  I guess one can say that this served as one of the precursors to instant coffee, which came about in the 1900’s.

We were there for brunch, and we had a the real experience: good European coffee and delicious food, and a relaxing environment to enjoy everything that we ordered.

Top of the list of course, is coffee.  Very rich and bold in flavor.  Their coffee is the result of a blend of  African, South American, and Asian coffee beans.  Tito Joy drives four to six hours to Chicago from a nearby state just for this cup of coffee. 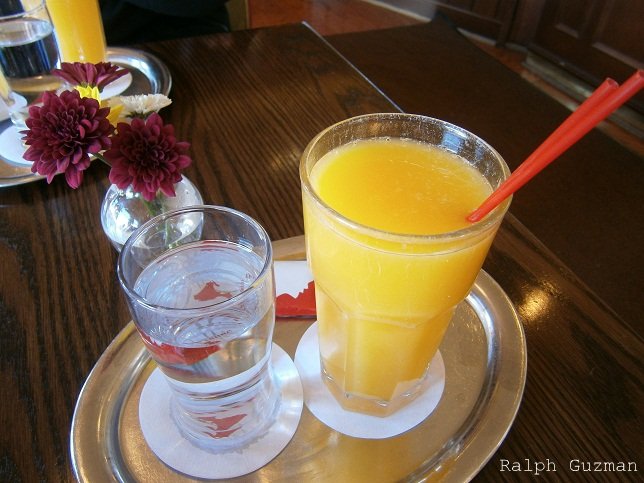 I especially enjoyed their orange juice.  It was freshly-squeezed and had just the right amount of sweetness. 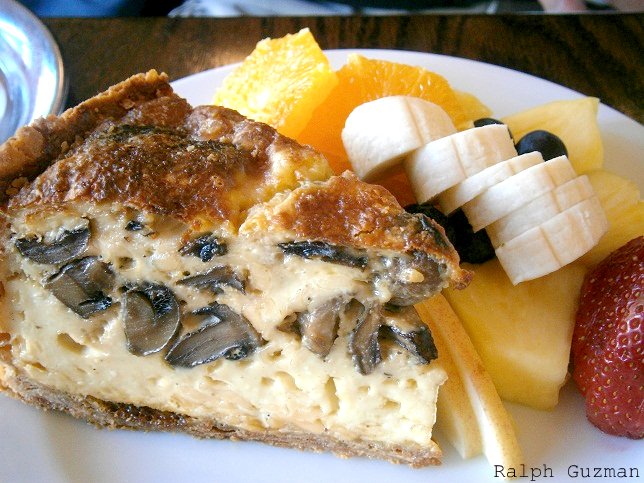 Tito Joy ordered Quiche, which was served with fruits on the side.  The quiche was very tasty, thanks in part to the mushrooms.  The eggs were cooked just right.  It still had some degree of fluffiness that allows the quiche to melt in your mouth. 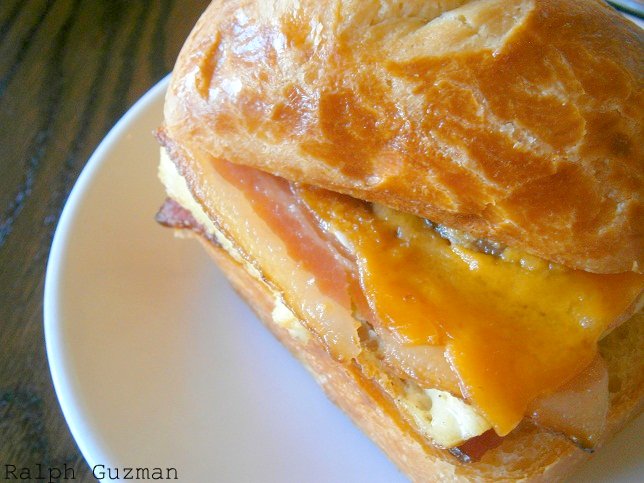 I ordered the Meinl Egg Brioche Sandwich, which had cheddar cheese, quiche-style egg, and smoked bacon on a house-made brioche bun.  The bread was good and the sandwich was good.  I expected a little more though from this dish. I really didn’t see a quiche-style egg and just saw ordinary egg.  So out of 10 stars, I only give this one a 7.5.  It’s better read on the menu than tasted.

The real highlight of the meal for me was the crepe.  I had the Brie and Ham Crepes, which is one of Julius Meinl’s specialties.  Aside from the ingredients already mentioned, it had black forest ham, Mornay sauce (a kind of bechamel sauce), and topped with mixed greens. 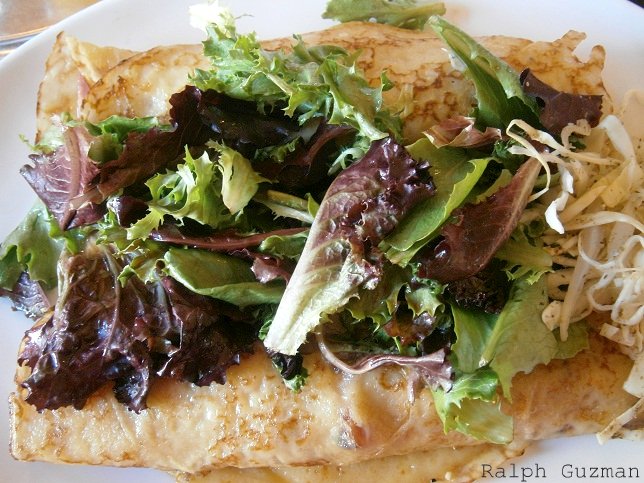 I loved how creamy the brie becomes after its cooked, and how it blended well with the ham.  The ham was smoky but not very salty.  I also loved the soft, thin texture of the crepe and how it contrasted with the crunch of the fresh greens.  Superb!  Here’s a closer look. 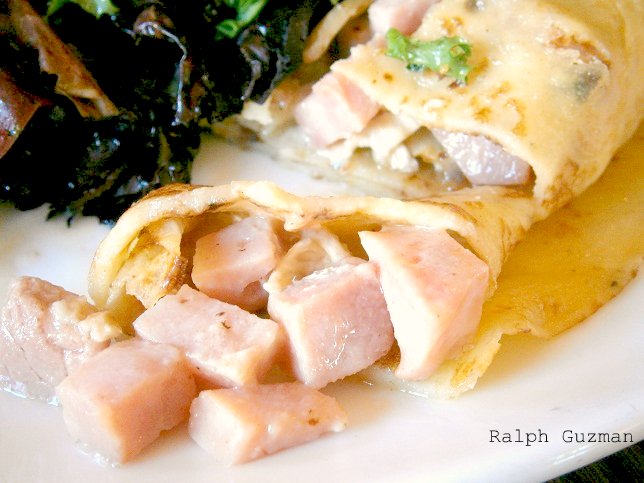 I didn’t have space anymore for dessert (as I was saving room for another destination that same morning), but here are some of the other treats at Julius Meinl. 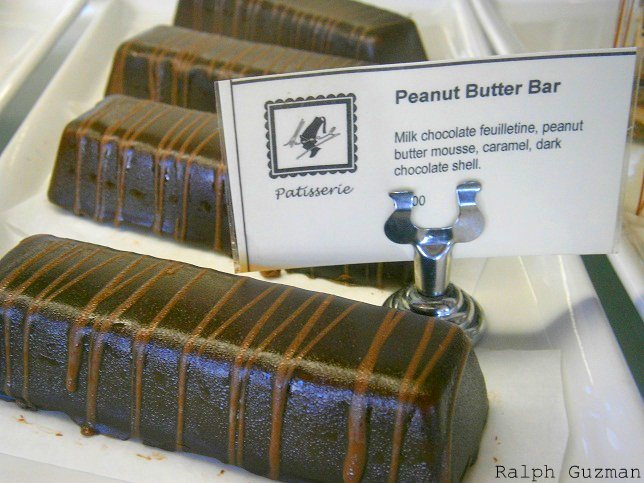 Here’s how the coffee house looks: 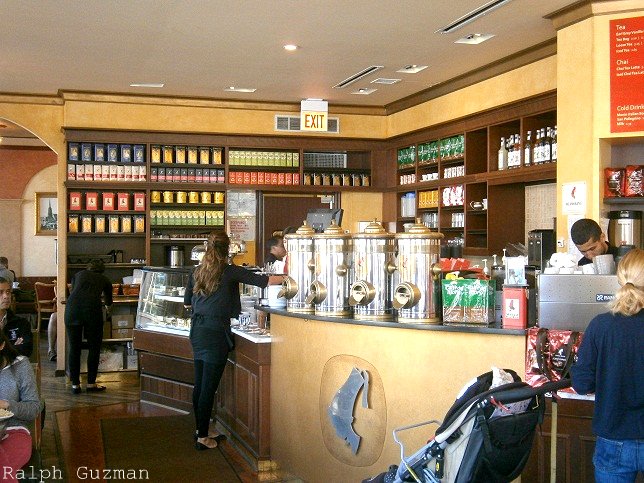 There are nights when Julius Meinl has performers.  This week, I understand that there are some classical pianists are scheduled during one of the nights.  I hope to return for this and be able to try out the other specialties of the place.   If you’re ordering food aside from coffee — and I recommend that you do that — you’ll spend about $10 to $20 per meal.

I understand that they opened in the United States in 2002. As of this writing, they are only located in the Chicago area.  Here are their branches: